Thank You Lidia and Congratulations! 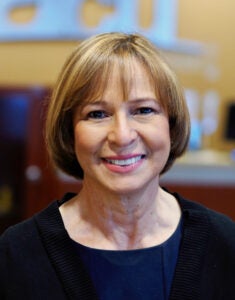 After forty-five years in the banking industry, with twelve at America’s Credit Union, Lidia Dockter, the Manager of ACU’s DuPont Branch, is retiring.

For these past dozen years, Lidia has been an essential part of the ACU family. She came to ACU when the building was purchased from Venture Bank in 2009. Lidia had spent the previous 16 years with Venture and had been the branch manager. Her connections with the community were so strong and vital, it was natural for ACU to entice her to remain and make the transition from bank to credit union.

Lidia began her career in her native Panama. She worked as a manager and trainer at the Banco Do Brasil in Panama City for 16 years. She learned the basics and more complicated aspects of banking, including trips to the Cayman Islands, focusing on international transactions. Her education included the Universidad de Panamá as well as two years at Louisiana State University. It was in Panama that she met her American husband who was stationed there with the US Army. Once married, they established their home in Lacey, Washington and she continued her career in banking.

Lidia is well known for her diligence and professionalism. Business casual attire means something completely different in her branch. That level of professionalism has seen many top-performing managers graduate from the DuPont branch to lead others after her tutelage. In fact, the next person to fill the management role in DuPont is Trevor Fetbrandt, someone she initially hired.

Trevor had been working at the commissary at JBLM when Lidia noticed his friendly and professional manner. Although he knew nothing about banking (he thought a CD was for music) she encouraged him to apply for a teller position. Upon his hiring, Lidia was tasked to teach him the ropes. After working his way through all branch positions, Trevor was sent to manage the South Tacoma branch of ACU. Just as he was trained in DuPont, he increased service, professionalism and connected to his staff and members, changing the culture, and improving branch performance.

Reflecting on her career, Lidia is thoughtful and humble. She is grateful to the United States and the US Army. She will miss the membership she has worked with and taken care of for so long as well as her co-workers at ACU. Her advice to Trevor, the young man she started in his career who will now be taking up her mantle is to stay true to himself. For Trevor it is sad to see this chapter end, but he is excited and appreciates the standards of integrity, drive, and morality that Lidia has always modelled. The scene of mutual respect and pride is close to overwhelming for them both.

She may be moving on to other adventures and some earned relaxation, but her impact and legacy will continue. America’s Credit Union thanks Lidia for all that she has contributed and wishes her the very best in retirement.